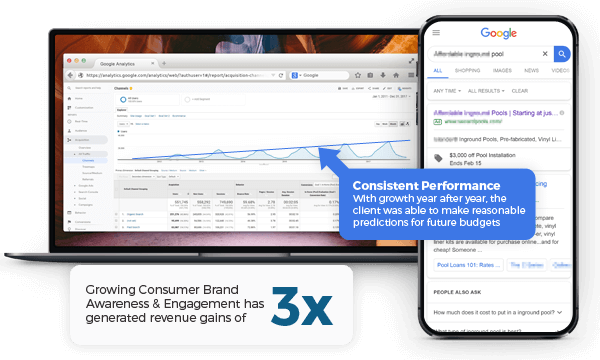 The more long-winded title for this case study could have easily been: How we helped one home improvement company transition from offline only marketing to online and increased revenue by more than 300%.

Within the first year, our client went from being in the red, to actually having a budget surplus to invest in their marketing efforts the following year. Within the two years to follow, we crafted a multi-channel strategy for all of their core services utilizing a combination of Google Adwords, Bing Ads, and Facebook Ads, along with retargeting and email marketing sequences designed to keep our client top-of-mind when their prospects are ready to make a purchase.

The result has been phenomenal to see. We’ve created and implemented digital marketing plans for all of the services our client offers so that they can focus on selling to warm leads and delivering quality services. Additionally, we’ve created systems to help them get more positive reviews online which turbo-charges all of our marketing efforts.

Today, our client has more than tripled the revenue that they had generated in their best year before working with us.

Up until 2010, our client had been using traditional print advertising to get new business. By the time they contacted us, they were at a turning point with more money being spent on newspapers and print media than they were making. They needed a new strategy but had been resistant towards changing what once had worked well for them.

With just a small portion of their marketing budget, we began with a strategy to locate the “low hanging fruit” and target people who were searching for their services on Google with the Google Adwords product.

Our initial strategy was to market their flagship service offering using a combination of Search advertising (via Google), Email marketing, and retargeting using the Google Display Network. We built out paid search campaigns that were paired with an offer in exchange for the prospect’s name and email. From there, we designed a series of emails that went out over a period of 60 days which would engage and inform prospects as they did their research. Lastly, we designed a retargeting campaign that followed prospects around the web with branded banner ads that kept the client’s brand top of mind. All of these touchpoints had a call to action that would prompt the prospect to take the next step and schedule an estimate with our client.