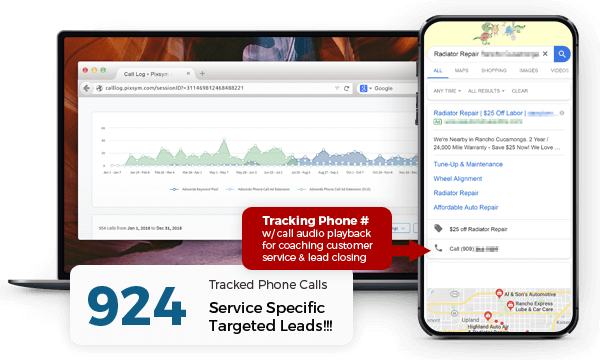 Our client came to us burned out after having tried what seemed like “every online marketing service out there” with little-to-no return. Just prior to working with us, he had spent several thousand dollars on a paid search campaign set up for him by a “big name” paid search ad provider with little new business to show for it. When he canceled, they kept his ad accounts so that he was never able to actually tell what he spent on ads vs. management. As you can imagine, this left him with a bad taste in his mouth.

Frustrated, he described what he had just gone through to a fellow business owner who happened to also be our client. He was given our contact information but was hesitant to try online marketing with yet another digital marketing firm. We started out by choosing his most profitable service offering and created a Google Ad campaign around it. We did this in a Google Ad account owned by him so that he could log in anytime and see what was spent on ads. We worked with him to create an offer, designed a web page to send traffic to, and set up a call tracking system so that all of the calls he got via this new campaign were announced before he answered them.

Within the first week, he was excited to be able to prove by way of call tracking, that calls were coming from our efforts. He booked three repair jobs from the ads we were running within the first week. By the end of the first month, he had booked more than enough jobs to pay for the entire cost of the campaign.

By the end of year one, we had replicated his successful campaign and branched out to market other high-net services that he offers. He has since explained that when he first contacted us, he was on the verge of closing up his shop. He is now thriving and has added another full-time technician to his staff. His comment to us was, “I tell all my business friends about you guys. Yours is the only marketing service I’ve tried that actually works!“.

This client is active with multiple campaigns, targeting different services at different times of year with competitive offers. This client is in a densely populated location in Southern California with plenty of competing auto repair shops within a 10 mile radius and has still brought in over 900 calls for specific services the owner wanted more of.

Before meeting Pixsym, the client was having a hard time finding anyone that could produce real leads of value. Not just quality leads at a good price, quality leads at any price. After doing that for years, trying one company & claim after another, he started wondering if it was time to close.

After talking with one of our other clients about their marketing troubles, our client was happy to refer us and the rest is history.

We’ve taken an automotive repair business concerned about potentially having to close, to one looking to expand & hire more technicians. These are the stories we wake up every morning looking forward to being a part of.